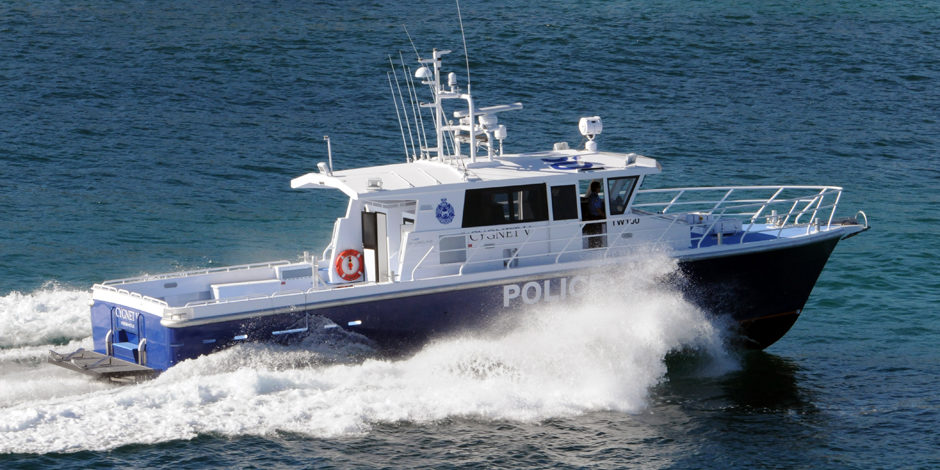 Measuring 17.7 metres in length and with a beam of 5.2 metres, the vessel was designed by naval architects Allseas Design. In the past, the WA Water Police have inherited larger patrol craft originally built for other authorities. Because of this, each “hand-me-down” vessel did not exactly match the department’s own requirements. Thus, when the time came for planning the department’s own new building, they went to great lengths to specify as near-perfect a vessel as possible.

Upon delivery, the client has unanimously praised the vessel. Powered by a pair of 746kW Caterpillar C18s, ‘Cygnet V’ has a fuel capacity of 5,000 litres to cater to the large operational zone between Esperance and Shark Bay. Vessel strength was also important, and the structure features closer frame spacing and heavier stringers than called for by NSCV.

Equipped for many functions, the vessel is as multipurpose as possible to cater to Western Australia’s diverse array of roles for its water police, including: escorting major aquatic events, transporting emergency reinforcements to Rottnest Island, and escorting visiting United States warships.

Operated by a basic crew of two and with accommodation for two more, the vessel’s survey is for 20 additional special personnel. The vessel’s accommodation is functional and sufficient. In the forepeak is a four-berth bunkroom, and aft is a galley-mess room. The bathroom is located off the main deck, and between the accommodation and engine room is a tank room.

The large wheelhouse is divided into functional nooks. Forward starboard is the helming station, forward port the navigation and communications centre, and aft port the search and rescue co-ordination centre, all equipped with the latest and best electronics and integrated systems. The SAR corner has the same access to the central police computer as a police station, and even better communications.

At times a police vessel needs exceptional agility. To provide for this, Shoreline fitted ‘Cygnet V’ with V-section rudders more commonly seen on ultra-high-speed vessels. On trials Cygnet V’s immediate response to helm and the tightness of her turning circle were described as “outstanding”.

‘Cygnet V’s design work did not start until the Water Police had spent seven months developing her specifications. Such was their determination for perfection that throughout her building they were constant visitors at Shoreline. As well as praise for the vessel, they also commend Shoreline’s Brad Moseley for his patience throughout the entire process, crediting his willingness to accept the almost-infinite number of minor variations.