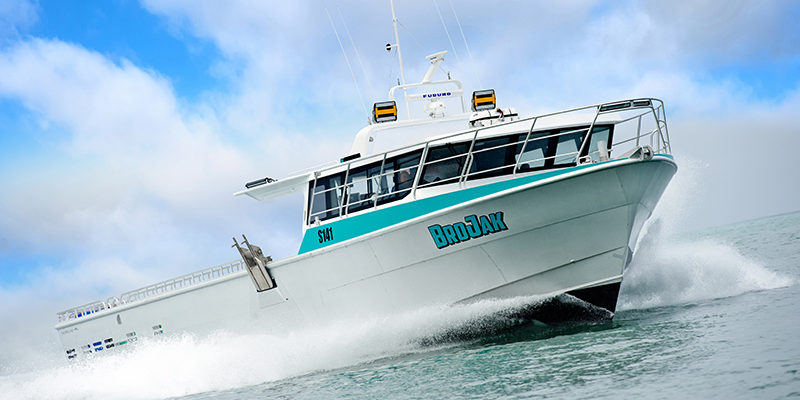 BroJak is the second plate aluminium vessel that Brad Moseley has built for the Williams fishing fleet, the first and also named BroJak, completed 20 years went on to serve the family well.

BroJak has a waterline length of 17.35m and 5.4m beam, with a 1.6m draft. While there’s sleeping for four people in the bow, the vessel is used for daily trips to fishing grounds 20 nautical miles away. It’s saltwater holding tanks below deck can accommodate 12 crates of fresh Southern Rock Lobster with plenty of space on deck for more. The Williams family is operating a total of 170 pots on the two vessels to meet this season’s quota of 18.5 tonnes.

Powered by a 1,000hp Scania 16-litre, V8 diesel engine, BroJak’s initial sea trials were conducted head on into a 25-to-30 knot south-westerly, the tail end of one of the biggest cold fronts to cross the south west corner of Western Australia. She cruised at 18 knots on 1,800rpm, consuming 5.5 litres per nautical mile. WOT produced 26 knots, using 7.7L/nm.